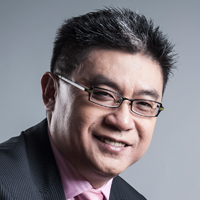 Christopher Wong Hong Wai （黄枫伟）holds the qualification of LL.B. from the University of Hull and was admitted as a Barrister-at-Law of Gray’s Inn, London. Called to the Malaysian Bar in 1994, he later joined Messrs Cheang & Ariff in 1997 as a legal assistant and was made partner in 2001. He joined Chur Associates in May 2018 and he is a senior consultant of the firm.

Christopher began as a dispute resolution lawyer covering all aspects of general litigation including banking, defamation, family, corporate and taking conduct of interlocutory hearings, full trials and appeals at all levels of the Malaysian court hierarchical structure.

His present area of expertise includes advising on a broad range of private and corporate loans, syndicated loans and securitisation documents for commercial lenders as well as investment banks. He also specialises in conveyance of real estate and corporate equity, mergers & acquisitions, corporate restructuring, investment advisory, contract negotiations and joint ventures, for both local and foreign clients.

Other notable appointments include:-

SPECIFIC ARE OF EXPERTISE

Engage Christopher to help you

Christopher as part of CA, he believes in these CAlture:-